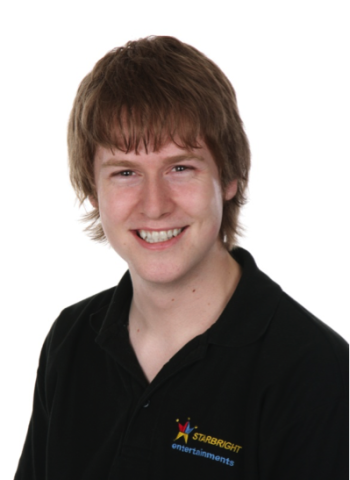 Former WSD Pupil
Phil joined the Welland School of Dancing at the age of 3 and attended classes until he was 18. In that time, he took part in the school's main shows, performances at local fetes and took many exams.

The school was always very supportive of Phil's skills outside of dance and he often performed magic, played anything from a jack the lad to a young dancer's father in the shows, appeared as Robin Hood for maypole dancing events and even turned up to one event as the front end of a panto cow to represent the old Stamford bull runnings. The Welland School of Dancing has always been like a family to many people and Phil remains in touch with many of his old teachers and fellow students.The support and encouragement given to students is so amazing and certainly gave Phil the confidence to peruse performing arts as a career.

At 18, Phil began touring the UK in Pantomime and Classic Literature shows. These saw him playing roles from Quasimodo to Aladdin and Tweedledee to the Captain of the Kosmic Krew. After 3 years on the road, Phil joined the cast of 'Rainbow Live!' which was the hit UK tour of 70s cult tv classic 'Rainbow'. Phil worked very closely with Zippy for the next three years touring many of the UK's great theatres as well as Pontins and Butlins holiday parks.

In this time, Phil also began to work as a comic for Polka Dot Pantomimes. He has now performed in 4 seasons at the South Holland Centre in Spalding, two seasons at the Guildhall Arts Centre in Grantham and three seasons at the Stamford Arts Centre. This year, Phil will be once again be directing and starring as Wishee Washee in 'Aladdin' at both the Grantham and Stamford Arts Centres.Phil also runs his own company, Starbright Entertainments, which provides scenery hire for schools and theatre groups, is a specialist ultra violet glow-in-the-dark puppetry act, works on a traditional touring Marionette Theatre and produces quality children's theatre shows. This year, the company will be producing three theatrical productions - 'Peter Pan The Musical', 'Bollo's Birthday Surprise' and 'Pinocchio'. In his 'spare' time, Phil teaches for a youth theatre in Spalding.