The school caters for both the serious student and those who dance recreationally for enjoyments sake. There are currently over 800 pupils, aged 2 to adult in attendance. The school is totally self funded and in its 43 years has received no public funds, (so no cost to the Stamford tax payer) a fact, the school, considered by many as a service to the town, is very proud of.

Welland School of Dancing began in the summer term of 1964 under Mrs Susan Mitchell Smith, and had two classes held at the YMCA, St Peter's Hill Stamford; a class for 3-4 year olds and ballet class for those of 5 years and over. The pianist was Miss Marjorie Perkins who was already playing for Mrs Mitchell Smith's classes at Stamford High school where she had been teaching since the end of 1963, having been introduced to the pupils there by their former teacher Mrs Elizabeth Dawes. Susan Mitchell Smith also held Keep Fit classes and dance classes at Easton on the Hill.

At the school's greatest point of expansion during this time there were over one thousand pupils, two full time teachers, and three part time, a part time secretary and a cleaner. Susan's husband Colin did most of the financial side of running the school, and also acted as stage manager, lighting operator, made props and did any artwork that was needed. Over the years classes were held at Stamford, Bourne, Easton on the Hill, Peterborough, Bretton, Billingboroough, Uppingham and Oakham and at Stamford High School (Junior and Senior School) Stamford Boy's school, Westwood House School, Morcott Hall School and Malcolm Sergeant Primary School. 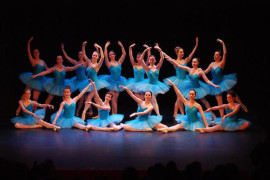 The dance school has long been at the heart of Stamford, both in its location and the role it plays in the lives of local residents. Alysia Anderson, herself an adult student and parent of two young dancers, looks at the WSD past and present. 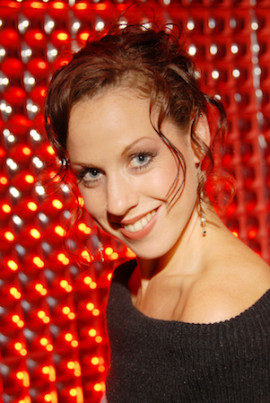 Principal of WSD 2010 – present
In 2010 Maggie and James moved back to Stamford and took over the running of WSD from Anne and David.

The school played a major role in Stamford’s Millennium "Showcase" concert, Stamford’s largest ever show. The concert was held in a 400 seat specially erected marquee on Stamford meadows. The event was coordinated by David (then Vice chairman of the local Arts committee) and involved all the local performing arts societies including Tolethorpe Shakespeare, Shoestring Theatre, Stamford Pantomime players, Stamford Brass, Choral society, and was a huge success. As well as WSD’s involvement in the evening shows, they performed two special Matinee performances of “Peter and the Wolf” accompanied by the Stamford Chamber Orchestra. 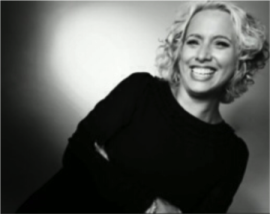 In 1993, Debbie Shuttleworth joined WSD and instantly became a firm WSD favourite. She’s now been with the school 25 years and daughter Jessica dances with WSD. In 1995 Anne and David moved the school from its St Mary's passage studio to new studios in Stamford Walk, with the main studio being the former Ballroom to the old Stamford Hotel. Anne and David spent many thousands of pounds creating a dance studio complex, including the ballroom that can be turned into a theatre with raised seating made by David, and used for the schools smaller productions.

In 1985 Karen passed the school onto Anne Desbruslais and David Walker.
Under Anne and David, the school grew to over 800 pupils with many starting at aged 3 and not leaving until 18 when they went off to University or dance/drama colleges. Anne taught ballet and other dance subjects at Stamford Junior school, Copthill school and Witham Hall school. During her time as Principal, many of Anne’s Welland school pupils have taken up careers in theatre both amateur and professional. All the local societies are full of Anne’s past and present pupils with many shows produced/directed and choreographed by past members. Over the years Anne has seen thousands of girls and boys through their dance exams with excellent results.

Karen Taylor began teaching at WSD in 1976 and then took over the school when Susan Mitchell Smith left at the end of the Spring Term 1983. During Karen’s time WSD produced “Dancemania” with a lively Maypole Dance arranged by Anne Beddow, Tap numbers “Changing of the Guard” and “What a Photograph” and Modern numbers “Urchins” and “Who will buy” arranged by Karen. She stayed until 1985 when she passed the school onto Anne Desbruslais and David Walker. 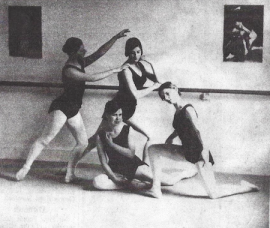 Karen started her full time dance training at Bush Davis, Romford. When the school closed after she had been there for a year she transferred to Laine Theatre Arts. Leaving in July 1976, she started teaching for Susan Mitchell Smith in the September. Karen left in December 1984 when her husband 's job moved to London. After leaving the WSD she became a full time mother to her two daughters. As they grew up she returned to dance and now runs her own school in Sheffield. 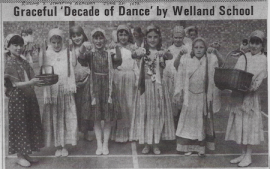 In 1970 WSD gave an open afternoon at Stamford College for the first Stamford Arts Festival. Lecture demonstrations on ballet were given by Susan Mitchell Smith. She was sometimes asked to do the choreography for other amateur productions. The ballet students were also given the opportunity to dance with touring professional companies such as being dolls in Coppelia with the Alexander Roy London Ballet theatre. Susan Mitchell Smith bought 2, St Mary’s Passage in 1971. Much thought went into the WSD logo, which was from a photo of Svetlana Beriosova. It was felt that the image of a ballerina would immediately tell the public what the school was offering. 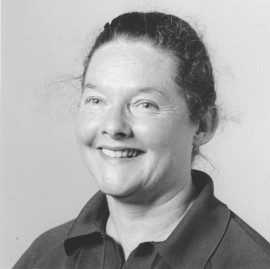 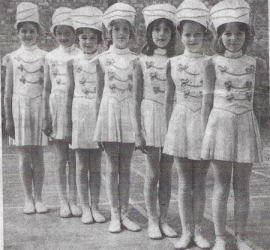 Welland School of Dancing began in the summer term of 1964 under Mrs Susan Mitchell Smith, and had two classes held at the YMCA, St Peter’s Hill Stamford; a class for 3-4 year olds and ballet class for those of 5 years and over.The pianist was Miss Marjorie Perkins who was already playing for Mrs Mitchell Smith’s classes at Stamford High school where she had been teaching since the end of 1963, having been introduced to the pupils there by their former teacher Mrs Elizabeth Dawes. Susan Mitchell Smith also held Keep Fit classes and dance classes at Easton on the Hill.