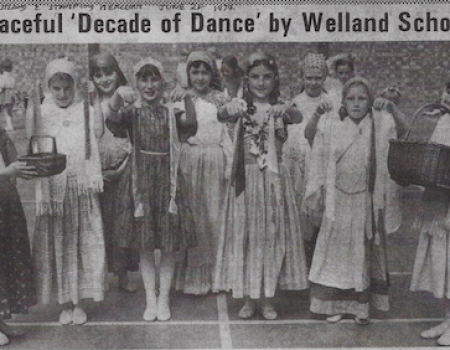 In 1970 WSD gave an open afternoon at Stamford College for the first Stamford Arts Festival. Lecture demonstrations on ballet were given by Susan Mitchell Smith. She was sometimes asked to do the choreography for other amateur productions. The ballet students were also given the opportunity to dance with touring professional companies such as being dolls in Coppelia with the Alexander Roy London Ballet theatre. Susan Mitchell Smith bought 2, St Mary’s Passage in 1971. Much thought went into the WSD logo, which was from a photo of Svetlana Beriosova. It was felt that the image of a ballerina would immediately tell the public what the school was offering.

However later, although they kept the same logo, they started to also use the bird in their prospectus.

In 1977 Susan became an examiner for the  ISTD Greek Faculty followed by an assessor for the Gold Duke of Edinburgh Award for Ballroom in 1977. The same year, WSD ran its first summer school. During this time, several students went on to full-time training at professional schools such as Arts Educational Schools, Nesta Brooking School, Hammond School, Pitt Draffen School and would also come back and join WSD displays.

There were also many pianists over the years including Marjorie Perkins who played for Anne Beddow at Peterborough, Stamford High School and Bourne. When Marjorie retired Julie Bebe took over at Peterborough and Phyllis Stennet at Bourne. Jean Simpson played for all the ballet classes in Stamford and Betty Lamb played for Prep class and at the Congregational Hall. Judy Turner played at Easton on the Hill and after WSD moved to Stamford they had a series of pianists including Mary Chapman, Jo Hall, Lynn Thomas, Nicky Lidbetter, Rachel Beadle Julie Bell, David Bortlik, Miss Pattison, Phyliss Stennet at Bourne, and Pippa Fernee whose mother Geraldine also taught on occasions.