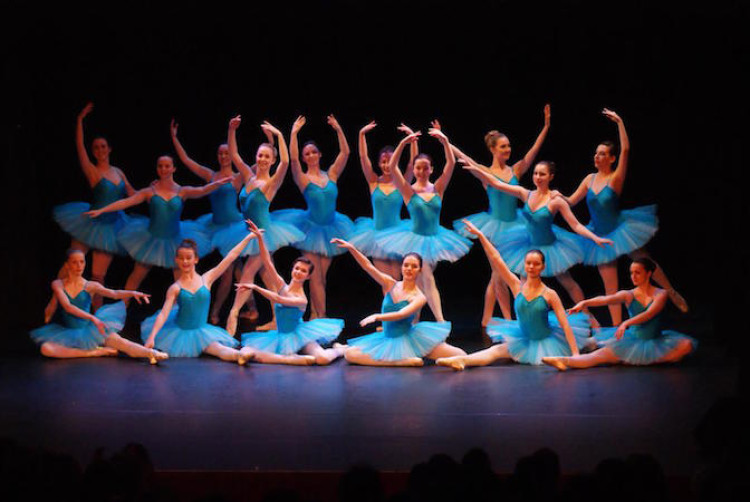 The dance school has long been at the heart of Stamford, both in its location and the role it plays in the lives of local residents. Alysia Anderson, herself an adult student and parent of two young dancers, looks at the WSD past and present.

In the early summer of 1964, Susan Mitchell Smith, who was teaching dance at Stamford High School and in Easton-on-the-Hill, set up the Welland School of Dancing. The first classes, one for pre-schoolers and a ballet class for the over-fives, were held at the YMCA on St Peter’s Hill. “Our first dance display was on 17 July 1965 at the Darby and Joan Hall on North Street” said Susan, who has kept Stamford Mercury newspaper cuttings from those early years showing smiling students captured on camera. The school continued to put on regular displays and, alongside children’s classes in ballet, modern and tap, offered adult lessons in ballroom dancing, tap and ballet. Performances were always in aid of a charity, often the Sunshine Home for Blind Babies and Young Children, and took place at various venues over the years such as the Congregational Hall in Broad Street, Casterton Village College, Stamford Theatre and the Key Theatre in Peterborough. The WSD also took part in smaller displays for church fêtes and Stamford Hospital and gave an open afternoon at Stamford College in 1970 for the first Stamford Arts Festival. Susan Mitchell Smith was sometimes asked to do the choreography for other amateur productions. On occasion, the ballet students enjoyed exciting opportunities to dance with touring professional companies, for example, as dolls in Coppelia with the Alexander Roy London Ballet Theatre.

In 1971 Susan bought 2 St Mary’s Passage. Much thought went into the WSD logo, inspired by a photo of prima ballerina Svetlana Beriosova who danced with the Royal Ballet for more than 20 years. Today, while the ballerina logo is still in use, the school has also introduced a bird image. At the school’s height there were over a thousand pupils, with classes taught in Stamford, Bourne, Easton-on-the-Hill, Peterborough, Bretton, Billingborough, Uppingham and Oakham. The first RAD Ballet exams took place in 1966 and were always reported in the Mercury. ISTD Modern and Tap exams were also taken as were Cecchetti Ballet and Ballroom exams at Stamford High School. Several students went on to full-time training at professional schools but regularly came back to join the school’s displays. Over the years many pupils have made successful careers in theatre, both behind the scenes and treading the boards. Students have performed with the Royal Ballet Company at Covent Garden, danced in the ballroom scene of the feature film Mansfield Park and appeared in West End shows such as Billy Elliot and Phantom of the Opera. Recently, several senior students successfully auditioned and performed with both the London Children’s Ballet and English Youth Ballet. Two former pupils went on to create their own dance companies.

The Welland School of Dancing caters for both the serious and recreational student, with currently over 600 pupils, aged two to adult. The school is totally self-funded and in its 50 years has received no public funds, a fact that the WSD, considered by many as a service to the town, is very proud of. There have been many teachers and pianists over the years including Marjorie Perkins, Jean Simpson and Betty Lamb. Anne Beddow (then Anne Groves) was the first teacher to join Susan Mitchell Smith in September 1966 and initiated the Ballroom exams at the High School. In 1976, Karen Taylor joined and took over the school when Susan left in the spring of 1983. Anne Desbruslais, who had been a visiting summer school tutor, bought the WSD in 1985 with her husband David Walker. Today they are still very much involved, despite handing over the reins in August 2010 to professional ballerina and former pupil Maggie Purr and her husband James Skinner. Anne said “I consider it a great privilege to have been a part of the lives of so many young people in Stamford and surrounding villages. Some pupils danced with us for over 15 years from the age of three until they left for college or moved away. My husband David and I have always felt that WSD is like a big family, a way of life, not a job. Anne Beddow took the classes at the Reformed Church Hall on Saturdays and I taught all the others. The school quickly grew from 250 pupils to over 500 and Debbie Shuttleworth joined us in 1993, taking over the modern and tap classes. We moved to the larger studio in Stamford Walk in 1995. The former ballroom to the Stamford Hotel was ideal for WSD. David worked on the studio for months, mending the leaking roof and redecorating to create the wonderful facility it is today. The immediate effect it had on our senior pupils was to improve their pirouettes! They had so much more room!” Anne has remained as WSD Patron and continues to teach there and at local schools, while David still makes most of the costumes. Teaching alongside Maggie Purr and Debbie Shuttleworth are Lisa Topliss, Amy Kendrick and Lesley Gramegna, between them offering tuition in ballet, tap, modern theatre and hip hop. In the charming tradition of dance schools, the teachers are known to the students as Miss Debbie, Miss Lisa and so on, while Anne and Maggie are Miss Desbruslais and Miss Purr.

Anne reminisced: “There are so many highlights from the last 50 years; the Stamford Millennium show in a huge marquee on the Meadows; dancing Peter and the Wolf with the Stamford Chamber Orchestra; performing at Belvoir Castle; Maypole dancing in 1790 costumes made by David for the Pride and Prejudice film company’s celebration; collaborating with local musician Jonathan Sismey to create the ballet The Elves and the Shoemaker. “ Anne spoke of the Christmas shows that the school took on tour to local hospitals, Stamford town hall and old folks’ homes, raising thousands of pounds for local children's charities. Today the school continues to raise funds for charities such as Anna’s Hope, Help for Heroes, Children in Need and the Cystic Fibrosis Trust. “Then there were the school shows that would take over our house,” said Anne. “We were determined that all pupils should be able to take part, with David making the costumes so that no one would have to provide their own. One year he made 60 tutus! We are proud that no-one ever had to make or buy a costume, making it affordable to all.” Anne told me how rewarding it was to have a child speak in class for the first time after weeks of being shy (she herself was sent to dance school because she was very timid) and of seeing numerous pupils achieve their dream of becoming professional dancers or having their own schools and companies. “I believe that all children should be given the opportunity to dance regardless of their circumstances. It is wonderful former pupil Maggie coming 'home' having danced professionally and taking over WSD to continue its journey onwards.”

From studio to show

Ballet, Tap and Modern Theatre classes run six days a week at the ballroom studio, with additional ballet and hip hop classes at the United Reform Church Hall on Broad Street. Classes are also taught at local schools such as Copthill, Stamford Endowed Schools and Bluecoat. The ballroom can be turned into a theatre with raised seating for all the school’s small productions or for hire. The school also puts on major dance shows at the Stamford Corn Exchange every other year and runs annual summer schools. The first summer school was held in 1977. Anne explained: “Junior Summer Schools developed initially to introduce the children to different dance genres but we soon discovered that really all they wanted to do was dress up in costumes and be in a show! So that became the format.” Last year, Maggie Purr introduced a Senior Summer School for the more experienced students. Currently, she is working hard on the 50th anniversary Corn Exchange production, written and directed by her. Maggie explained: “The shows include all pupils from Grade One Ballet upwards and have a theme about life in and around Stamford. The WSD is a great supporter of the Stamford Exchange theatre project and has invested over £6,000 in the refurbishment programme. Our 50th anniversary production, from 13-15 March, was called Stamwood Through Time.